Accueil > Actualités > According To Google, Barack Obama Is King Of The United States

According To Google, Barack Obama Is King Of The United States 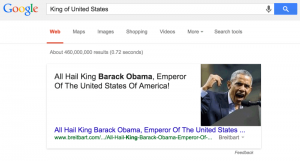 Ask Google who is the [King Of United States] and Google will inform you that it is Barack Obama, the current President of the United States.

The Google Answer is pulled from Breitbart, a story they posted five days ago named All Hail King Barack Obama, Emperor Of The United States Of America !

It appears that Google picked up that story and assigned it to their Google Answers database, potentially filled within their knowledge graph.

Why would Google show this answer when it is clearly wrong ? Is it an Easter Egg ? I strongly doubt it. But it does look to be a case where Google got it wrong when it comes to getting answers from third party sources.