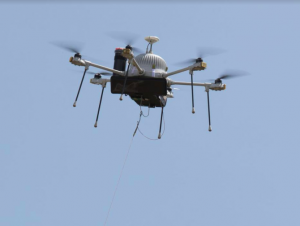 The wireless carrier said this week that it has successfully adapted its Magic Box signal boosting technology to fit on a drone and provide temporary cell coverage over as many as 10 square miles. The company tested the setup, which uses a lighter version of the mini cell tower and a drone from CyPhy Works, last week in Texas, 30 miles outside of Dallas.

Sprint launched the Magic Box earlier this year. The box, which is the size of a shoe box, normally sits in your house to improve indoor 4G LTE service using Sprint’s 2.5GHz spectrum. Unlike other signal boosters, Magic Box doesn’t require a broadband connection. Instead, it uses a dedicated cellular channel to the nearest Sprint cell tower.