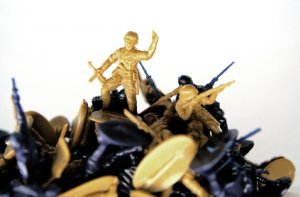 The economist Fritz Machlup wrote an essay about weaselwords : words concealing voids of thought . . . used to avoid commitment . . . which destroy the force of a statement as a weasel ruins an egg by sucking out its content. Machlup was talking about how economists often use words like structure instead of empirical cause-and-effect linkages. Ironically, after years of books, articles, and MBA programs dedicated to strategic thinking, thats the danger with how strategy is used in business meetings. Its too often a way of sounding smart or leader-like and used to avoid necessary choices.

Machlup explained how this can happen : when an economist uses the word labor, no one will ever think of the painful muscle contractions preceding childbirth, and if we say capital he may not know precisely what we mean, but he will rarely confuse it with the seat of government in a state or country.